Sim Khan of custom menswear brand Brimble & Clark is going on offense during COVID-19 despite a disrupted supply chain. 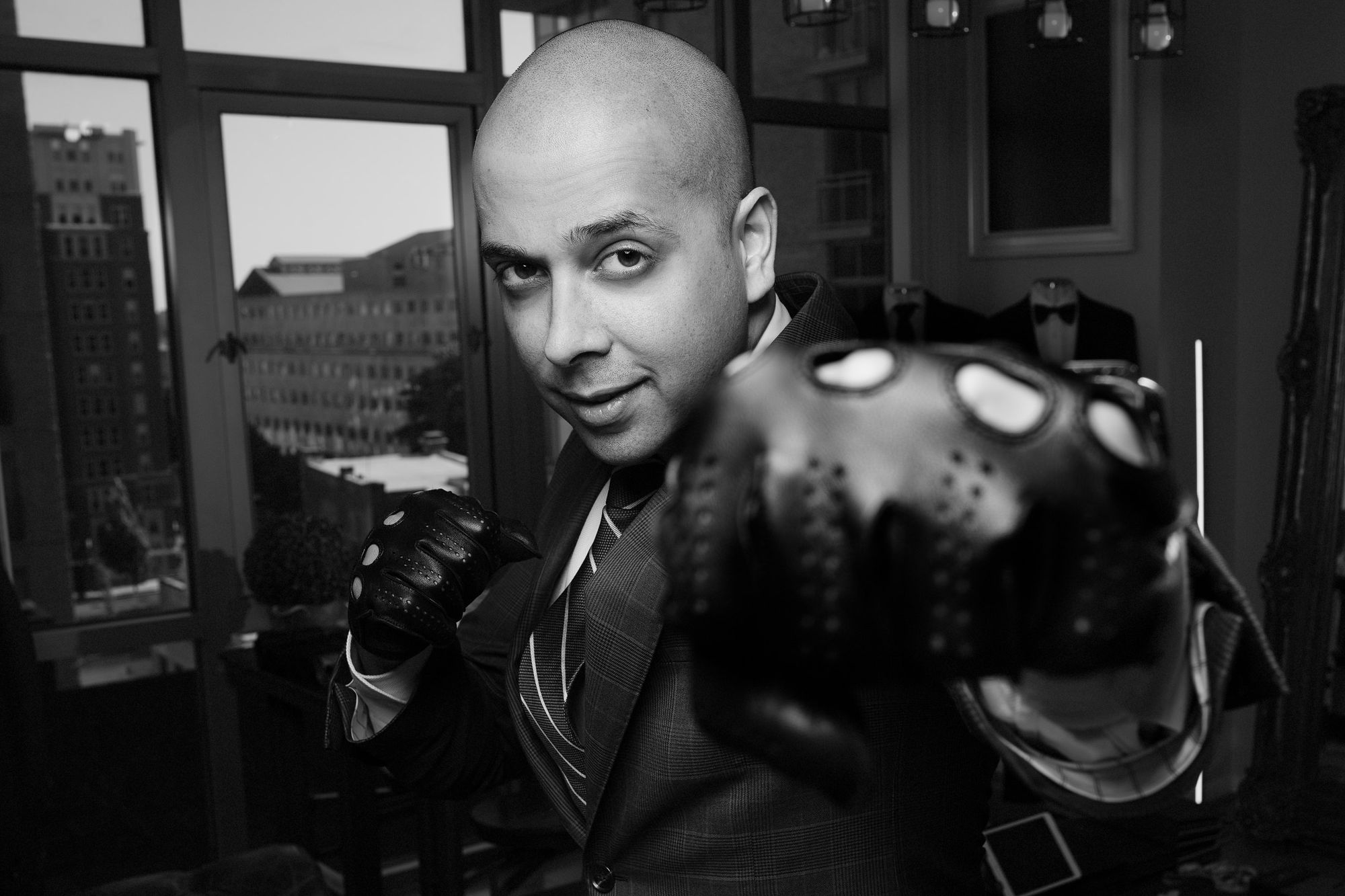 This interview was conducted with Sim Khan, founder and CEO of D.C.-based Brimble & Clark.

It’s no surprise that in a town like Washington, suits and formalwear are a regular staple in almost every wardrobe. Sim initially started his career as a lawyer, before translating his passion for bespoke suits into a full time endeavor. In [2012] Sim dedicated himself to the sartorial tradition of producing custom menswear, founding Brimble & Clark.

Today, Brimble & Clark is renowned in D.C. not only for the high quality and design of their products, but their legendary clientele as well. In addition to providing custom suits to a notable array of the region’s top corporate executives, Sim’s client list also includes dozens of professional athletes in the NFL, MLB, NHL, and even iconic pop stars such as Diplo and DJ Snake. The popularity, quality, and critical acclaim for his products are only surpassed by the surprising relative size of his company with just two showroom locations - which has only served to elevate Brimble & Clark to a rarified luxury product in the D.C. retail landscape.

It’s difficult to find any professional meeting conducted in D.C. without a gaggle of people in blazers or ties. With the impact of COVID and mandatory social distancing, almost all work meetings have transitioned into virtual hangouts where standards of attire are often relaxed. This of course has had a direct impact on retail sales, particularly for entrepreneurs like Sim who rely on consistent sales of formal attire to keep his business running.

This interview is a glimpse into his life before the pandemic hit, as well as the adjustments he’s had to make to his business to survive the current economic climate.

What is your name? What is the name of your business?

Sim Khan, I own Brimble & Clark. We're a custom menswear business focused on tactical tailoring and tailoring for enhanced movement.

Describe what your business was like before Covid-19 hit. What did an average day look like for your business?

Brimble & Clark is a suiting company with a very specific niche - featherweight menswear that moves in a certain way that other suits cannot. Our clients included people from government agencies and contractors, but also a lot of pro athletes and corporate execs. Just before this we did 16 players on the Minnesota Vikings including Washington’s former starting QB, Kirk Cousins. In total, we have 53 pro athlete clients in baseball, football, baseball, and soccer.

We have two locations, one in DC, and one in Baltimore, where people would come in for fittings - but now we are doing more virtual fittings than in-person sessions. Essentially we produce everything guys need to look good at work and flex on their friends after hours.

When did you start to feel the impact of COVID-19, what happened?

Kind of right away. Before COVID hit, we were busy. We were growing steadily, and customers would always be coming in. Luckily, what's been helping us survive is the fact that we had a good number of orders in the pipeline before the virus hit. That’s provided a little bit of cushion. We were thriving as a business but when the virus hit, it knocked out production first.

The whole global supply chain got knocked out before the lockdowns actually happened. Italy was paralyzed, Asia was paralyzed.

People were worried about when their orders would come in, and then the lockdowns happened in the US. Now our production is back up and running at full capacity but, as soon as lockdowns happened, people couldn't physically go anywhere anymore so naturally new orders plummeted.

How has your assessment of the potential impact on your business changed over time as this situation has unfolded?

That assessment has changed a couple of times. Luckily, we had this buffer that provided a runway for some time.

During this time, there are two ways that you can react to a situation like this as a business owner; you can either look at the cash cushion you have and say “Hey, I'm going to conserve my my money until I ride this crisis out and hope that I don’t run out before I get pushed off the cliff ahead.” Or you can actually increase spending during the downturn and accelerate toward the cliff ahead of you, aggressively funding expansion to hopefully propel you into a bigger, badder and stronger company on the other side of this crisis. Sure, the latter approach could just end up accelerating you over the edge of the cliff. It’s a much bigger risk. But it’s also a lot more exciting.

So that’s what we’ve been doing, expanding product lines.

Because of that expansion, we have these new Coronavirus leather gloves that look cool, but help you stay safe. We also developed athleisure turtlenecks that cover your face to function as a mask. We also have mask hoodies, and even this sweatpant-fabric suit that I'm wearing right now. My strategy has been to grow or double down on growth, hoping that when the world reopens, we'll have the momentum already started during this COVID process to come out bigger and better.

That said, I don't think anybody can really predict how things will turn out. There have been certain adaptations we’ve had to make including expanding our virtual fittings. We learned to do virtual fittings for pro athletes because they get traded to different teams in different states. Now we are able to do that for everyone.

Navigating COVID has really been about adapting to reach the customer.

What resources, if any, helped you through this time period?

Luckily we had a good number of orders in the pipeline before the virus broke out. The revenue from that has been able to keep the lights on during that time.

I’ve been generally fearful of government loans and the implementation of those programs. Something that's categorized as a loan, that “may or may not be forgiven,” and the terms of which are very unclear as to their forgiveness, is a tricky thing to get involved with.

I'm a lawyer first. I was a lawyer for four years before building the business. If the terms of a loan are that murky, it opens the door for banks to say, “Well, we don't have to forgive this so we're not going to.” So no, I haven't been applying for any of those programs. It would be helpful if they had more clear guidelines as to what makes businesses qualify and how that application and forgiveness process works.

I fear putting the business in a place of debt that is worse than the initial cash flow situation.

How has this experience changed Brimble & Clark?

I have been preparing for a national economic downturn for the last two years, as speculators and experts have been talking about the U.S. being due for a market correction.

To account for that I started focusing the business on specialized attire enhancements for military and government agencies; providing increased range of movement and other functionalities in our clothes. When there's a downturn in the economy, military spending and agency spending tends to go up so we invested heavily in creating more practical / tactical / military applications for our suits. That said, I didn't expect the whole world to get paralyzed to the point where people would be unable to leave their homes at all.

Even with people staying in, they still want to buy things that make their lives better - and I like solving problems through design. A good example is that often when I’m at the grocery store during the pandemic, I’ll get frustrated because I left my mask in the car or even worse, at home. That’s where the idea of this dry-fit turtleneck came from; you can just pull up the neck to cover your face when you need to go to a grocery store. Integrating this additional functionality into the clothes makes people's lives a little easier during this outbreak. That’s a good example of how we’re adapting to the evolving needs of the customer.

‍‍I'm a big believer of the ‘adapt or die’ mindset and I love creating things that people want.

What has been the most difficult thing you have dealt with so far?

The impact on my people. I want to make sure they're taken care of and that there’s no interruption for them financially. But this has been a real disruption, especially to their incentive-based compensation. It’s stressful.

The initial problem was that production was crippled for four weeks or so. Customers’ orders were starting to get delayed even before the lockdowns happened here. They would ask, “Where's my order?” because their weddings were still on and they were getting worried.

COVID wasn't real to them because the lockdowns hadn't started in the US just yet. In a sense, there was actually a little bit of a relief for us when the lockdowns happened here because customers understood that the whole world is paralyzed. Our production is back up and running at full capacity now, but that was an uneasy time.

Nobody was being derelict in delaying their suit orders. It's just that the world literally stopped production.

There's always going to be some kind of new challenge in business. There's always a new obstacle to figure out or risk to take. If you're not ready for that, then just don't go into business. It's stressful, but it's part of the fun of captaining your own ship. The ship sinks or survives based on your decisions.

Has anything positive happened for you personally or for the business as a result of COVID-19?

Before this, we were solely offering business attire, from suits and tuxedos to overcoats and leather jackets. Our casual wear has really expanded during this crisis to cater to clients staying at home, and I’m excited that it’s presented a new market and revenue stream for the business. And who knows, maybe virtual fittings will allow us to expand our customer base.

Have you been following the reopening process in other states, how does that make you feel?

In a sense, I feel like either the whole country should reopen or nobody should reopen at all. I do feel that the economic impact of the lockdowns are worse than the virus itself. But, that's from the perspective of a business owner and lawyer, and not a doctor or scientist. Do I think we should reopen sooner than later? Yeah. If the southern states are doing it, then we should be doing it too.

What have you learned from this experience?

I’ve learned that people who work for you can be very loyal to your company, much more than I expected. That's been kind of heartwarming and it makes me want to make this growth strategy work even more. Because as we grow their compensation grows, and I want that for them.

I have found comfort in pursuing the grow-while-times-are-tough approach, even if it involves a serious risk, because it’s being proactive. That’s not to say there wasn’t a period of panic that I went through in choosing that path, but it feels good to have put that behind me.

I'll never stop fighting. Even in the worst possible circumstance, there's always something you can do to push ahead and come out on top.